DBL Law broke ground Thursday on its premiere headquarters, an $11.3 million refurbishment of the historic Monarch Building that will return Northern Kentucky’s largest law firm to its downtown Covington roots.

DBL Law was joined in the groundbreaking by officials and representatives of organizations assisting with and supporting the project, including The City of Covington, Covington Independent Schools, Kenton County Fiscal Court, The Catalytic Development Funding Corp. of Northern Kentucky and Republic Bank. Due to the COVID-19 outbreak, the private ceremony was livestreamed to allow employees, clients, friends, the news media and others to participate safely.

Covington Mayor Joe Meyer took a historical approach to the project and said the impact of seeing “one of Northern Kentucky’s quintessential law firms” return to the city resonated beyond the confines of the Monarch Building.

“If you consider that the vibrancy of urban areas, like that of civilizations, is not static but rather ebbs and flows, the return of DBL Law is clear evidence that Covington is on its ascension,” Meyer said. “The investment, the jobs, the activation of a vacant building, and the infusion of intellect accelerates the city’s momentum in a big way. We’re extremely excited.”

The firm – now based in Crestview Hills – was founded more than 60 years ago by Judge Bill Dunn and Judge Jim Dressman Jr. in a basement office at the corner of 4th and Garrard streets in Covington.

The Monarch Building will be the bridge to connect the firm with its history through a historic building, said DBL Law Managing Partner Bob Hoffer, who joined the firm 40 years ago at the office located at 219 Garrard Street.

DBL Law expects to move to the new headquarters in the Fall of 2021.

“DBL Law is excited to begin construction of our new headquarters and all of the opportunities to engage with and invest in the urban core of Covington and our entire regional community,” Hoffer said.

Developer Allen Haehnle will partner with Albert Fedders of Fedders Construction and Construction Manager Chris Thurston on the renovation of the Monarch Building into 34,000-square-feet of class A office space. The four-story headquarters building which is being designed by PCA Architecture will provide room for future growth with a combination of unique and historic spaces that will help the firm recruit and retain talented employees. The renovated building will include:

“DBL Law has been a dynamic presence in the region’s community for six decades, and their move to the Roebling Point neighborhood will add substantially to an already surging urban renaissance in Covington,” Judge-executive Knochelmann said. “I’m particularly thankful to witness the leadership DBL Law is taking on this project, because it reflects both their history of investment in the community and a promise of more to come in future generations.”

“Allen Haehnle was one of the first developers with the vision to make quality investments in Covington’s historic buildings that attracted great companies such as DBL Law to the city,” said Jeanne Schroer, president and CEO of the Catalytic Development Funding Corp. of Northern Kentucky.

The Catalytic Fund provided development services to support the execution of the project including financial analysis, assembly of the project’s capital stack, and assisting with tenant’s location analysis.

“The Catalytic Fund was pleased and honored to support the redevelopment and expansion of this beautiful building,” Schroer said. “DBL Law is not only an excellent law firm but their partners and employees make a real difference in our region by their leadership in many community initiatives. The project is going to be a huge catalyst to the Roebling Point neighborhood and the City as a whole.”

Located in the 100 block of East Fourth Street in one of Northern Kentucky’s most vibrant areas, operating in the Monarch Building will allow DBL Law employees to visit the many interesting new and established restaurants in the neighborhood, run or walk the Suspension Bridge, stroll through nearby parks along the Ohio River and in the Historic Licking Riverside Neighborhood. It is also within walking distance of the state and federal courthouses, Covington City Hall and the Kenton County Courthouse and easily accessible from downtown Cincinnati, interstates 75/71 and 471 and Dixie Highway.

And Tom Saelinger of Republic Bank, which also has a branch and offices in downtown Covington, said the bank “is proud to be involved with this exciting project in the heart of Covington”.

“DBL Law has a reputation of excellence and is known for their involvement in the community on many levels,” Saelinger said.

DBL Law is a full-service law firm, representing businesses, nonprofit entities and individuals. The firm has 99 employees, including 49 attorneys and offices in Cincinnati, Louisville and Northern Kentucky. 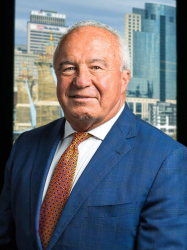