David Dirr is an attorney at the Northern Kentucky office of Dressman Benzinger LaVelle and is a member of the firm’s healthcare and litigation practice groups.  He is licensed to practice in Ohio, Kentucky, and Indiana.  David concentrates his practice on the areas of Medicare and Medicaid reimbursement, anti-kickback law, the Stark law, and HIPAA. 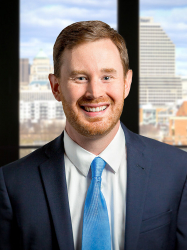